VeryPDF Cloud DocSafe: Support for opening and encrypting PDFs with the latest algorithm AES 256 algorithm (R=6). This algorithm was defined in the latest PDF specifications (PDF 2.0) and is compatible with Acrobat X and later. The new algorithm is used when applying new signatures but the “old” algorithm (R=5) is still verified in existing signatures for backward compatibility with Adobe Acrobat 9.

You may test both 128-bit AES and 256-bit AES encryption algorithm from this web page, 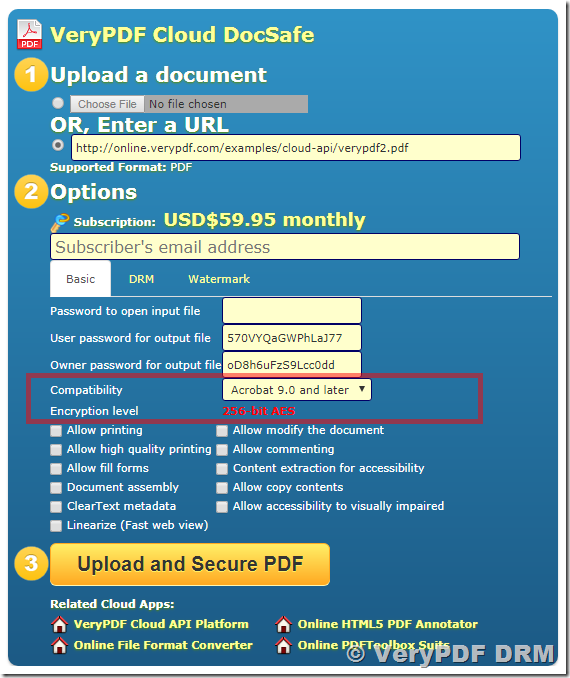 RC4, a symmetric stream cipher (i.e. the same algorithm can be used to encrypt and decrypt). RC4 no longer offers adequate security and has been deprecated in PDF 2.0.

AES (Advanced Encryption Standard) specified in the standard FIPS-197. AES is a modern block cipher which is used in a variety of applications.

Since the actual encryption keys are unwieldy binary sequences, they are derived from more user-friendly passwords which consist of plain characters. In the course of PDF and Acrobat development the PDF encryption methods have been enhanced to use stronger algorithms, longer encryption keys, and more sophisticated passwords.

Keep in mind that only PDFs with a user password (required to open the document) are safe from cracking. The following should be avoided because the resulting encryption is weak and could be cracked:

Passwords consisting of 1-6 characters should be avoided since they are susceptible to attacks which try all possible passwords (brute-force attack against the password).

Passwords should not resemble a plain text word since the password would be susceptible to attacks which try all plaintext words (dictionary attack).

Passwords should contain non-alphabetic characters. Don’t use your spouse’s or pet’s name, birthday, or other items which are easy to determine.

40-bit RC4 according to PDF 1.3 (Acrobat 4) encryption should be avoided since it is susceptible to attacks which try all possible keys (brute-force attack against the encryption key).

The modern AES algorithm is preferable over the older RC4 algorithm.

AES-256 according to PDF 1.7 Adobe Extension Level 3 (Acrobat 9) should be avoided because it contains a weakness in the password checking algorithm which facilitates brute-force attacks against the password. For this reason Acrobat X/XI/DC no longer offer Acrobat 9 encryption for protecting new documents (only for decrypting existing documents).

In summary, AES-256 according to PDF 1.7 Adobe Extension Level 8/PDF 2.0 should be used. Passwords should be longer than 6 characters and should contain non-alphabetic characters.

AES 256 algorithm and support in VeryPDF Cloud DocSafe
No votes yet.
Please wait...
Tagged on: docsafe